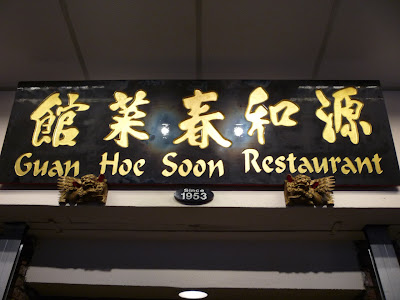 Guan Hoe Soon Restaurant along Joo Chiat Road has always been a very special place for me. When I was little, we used to visit my Peranakan grandparents who lived along Joo Chiat Road just up the road every Saturday. Guan Hoe Soon was one of the restaurants we would go to regularly, probably about once a month. My grandfather liked the hee peow soup there very much. For my grandmother to condescend to eat there, it must have been really good since she was (and still is) the best cook I know.

When I got married 2 years ago, we catered our lunch buffet from Guan Hoe Soon. I'm proud to say that until today, my parents-in-law are still receiving compliments from their friends about the food at our wedding (especially the bakwan kepeting and chendol). After making the booking then, I casually mentioned it to my mother, and she told me that Guan Hoe Soon had also catered the food at my parents' wedding as well, which was held in 1967 just up the road at my grandparents' place in a tok panjang style. It was a wonderful discovery!

[Side story: I was so dying to eat the food at my wedding that after I thought I was done with saying hi to all the 400plus guests, I plonked myself down with strict instructions to my friends to just sit with me and not talk to me at all so I could eat. The quality of the food when mass-catered, compared to eating at the restaurant, was still really good! I was most annoyed when people kept coming up to me to congratulate me :p Fortunately there were 2 spin-off parties in the weeks after that (2 of my friends at the wedding had decided to use them to cater for their babies' first month & birthday celebrations) so I got to eat my fill subsequently!]

Today, Joo Chiat Road has developed into quite a different place from what I remember as a child. My father would lament about how the place had degenerated from a stately Peranakan and Eurasian enclave to a seedy dodgy strip full of street workers and bars. When we went there last night for my parents-in-law's 32nd wedding anniversary, the street scene on the walk to the restaurant was fairly colourful.

The restaurant is run by a couple named Raymond and Jenny. Jenny is the granddaughter of the original owner who started the stop back in the 1950s. My father told me that the place was run by a Hainanese family - back in the early 1900s, many Hainanese chefs used to work in Peranakan households, and after picking up their cooking skills, would set up their own shops selling Peranakan food. The menu is pretty extensive, with dishes ranging from $8 for a small portion to over $20 for a large serving, depending on what you order. 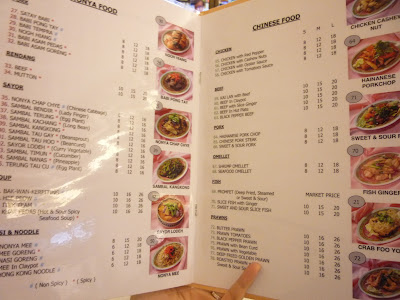 I love the old school menu with the 1980s-style food pictures. 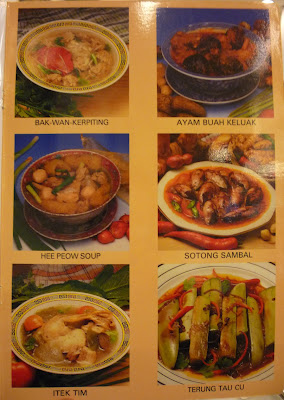 Their interior is fairly old school as well. They have printed napkins, and serve their Chinese tea in glasses. All the tables have marble tops, and you sit on coffeeshop-style wooden chairs. 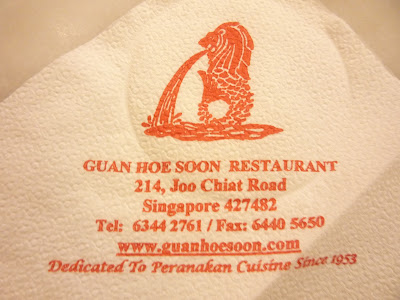 What's a Peranakan restaurant without sambal belachan? Their sambal belachan is pretty good, with the right mix of chilli and prawn paste. You can also taste the limau perut in it. 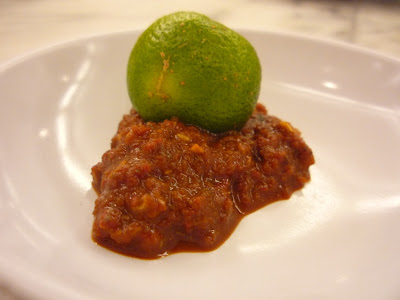 They give you sambal timun salad with chicken gizzards as a starter. This dish is amazing. The bunga kantan flavour really stands out. 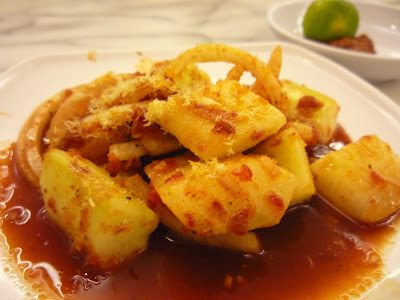 First up was hae chor. 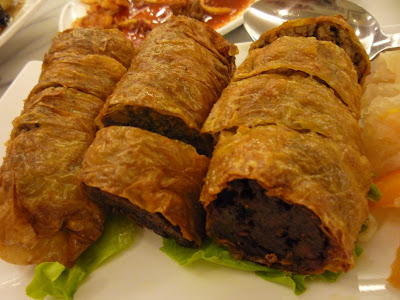 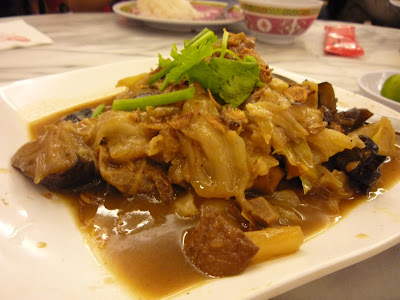 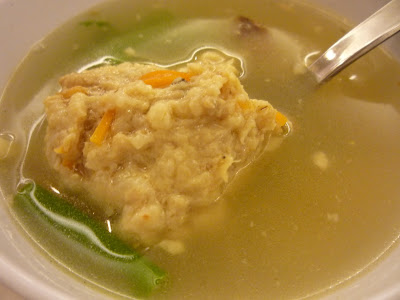 Assam pomfret. The husband liked it (I'm not a fish fan). 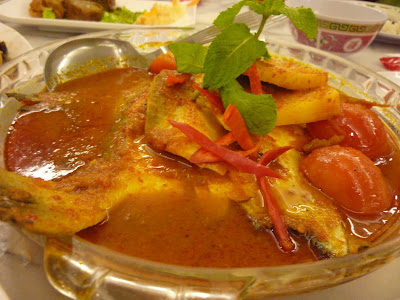 Ayam buah keluak. It was really good, with lots of assam and a pretty good mix of spices. My only gripe was that there were bits of buah keluak shells in the buah keluak filling. In cooking buak keluak for my family, my father used to clamp the nut, take a hacksaw and carefully saw off the edge of the nut. To ensure that there were no sharp bits, he would then sandpaper each nut. But guess that takes too much time for a commercial enterprise. 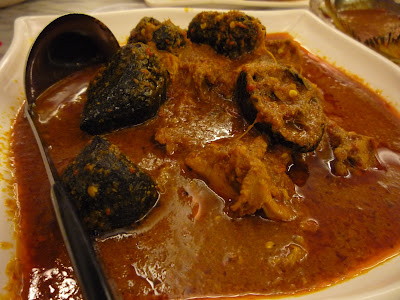 Hainanese pork chop. One of my father-in-law's favourites. I didn't try any...no self-respecting Peranakan goes to a Peranakan restaurant to eat Hainanese food : ) 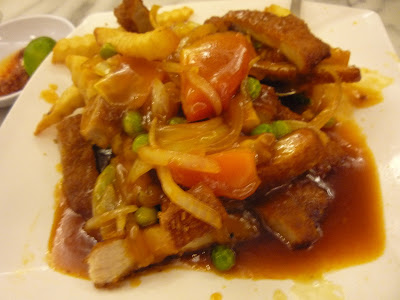 No matter how much you eat, you must must MUST save space for dessert. I was told by my parents-in-law that my husband's grandfather had no less than F O U R servings of chendol at our wedding. It is really the best chendol in Singapore. My friend told me that her diabetic grandmother used to sneak out of the house and take a taxi to Guan Hoe Soon to have her chendol fix, and casually arrive back home pretending nothing had happened. I don't know how that is possible. Eating Guan Hoe Soon's chendol is a life-changing experience!!!

Raymond told us that the brown syrup is not basic gula melaka, but gula melaka combined with 3 other types of sugar and boiled for hours. Even the way they soak the red beans is special - they don't just soak it in water, but also add some sugar to soak it before and after they boil the beans. 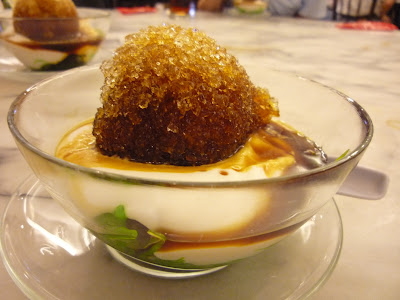 If you intend to go there on a weekend, make sure you get there early. On a visit to Guan Hoe Soon earlier this year on a Friday night, the place was packed solid and there were many people waiting outside for a table (they don't take reservations). We took the last available table, and were most gratified to see KF Seetoh (of Makansutra fame) standing in the five-foot way for at least half an hour waiting for a table. Since he was without his camera crew (and signature hat), it was good to know that the place was good enough for Seetoh to patronise during his day off.